Issues of social justice and racially motivated violence have been tragically at the forefront of the news in the past several years. The deaths of Trayvon Martin, Eric Garner, Sandra Bland, and many others have brought with them a painful awareness for many Americans of the sometimes hidden forces that continue to undermine civil rights in our society. The exhibition Force/Resistance seeks to stimulate dialogue around the complex relationships between systems of power and violence in the United States. The artists in the exhibition address a range of issues including racial profiling, mortality, racially motivated conflict, and legislative oppression. 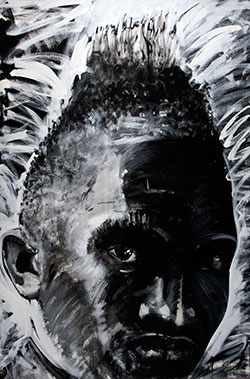 Painter, sculptor, printmaker, photographer Floyd D. Tunson freely and fluidly combines a variety of media and artistic styles to create artworks that address social and political themes, but also engage ideas of beauty, philosophy, and popular culture. He embraces the complexity of the world in his work, acknowledging in his artist statement, “Looking at life from one direction, I see the terror of chaos, man’s inhumanity to man, mortality, and the vastness of the unknown. From another direction, the human condition seems like a magnificent, orderly evolution of extraordinary beauty. The totality of my work reflects my quest to comprehend and express these forces and their interconnectedness.” 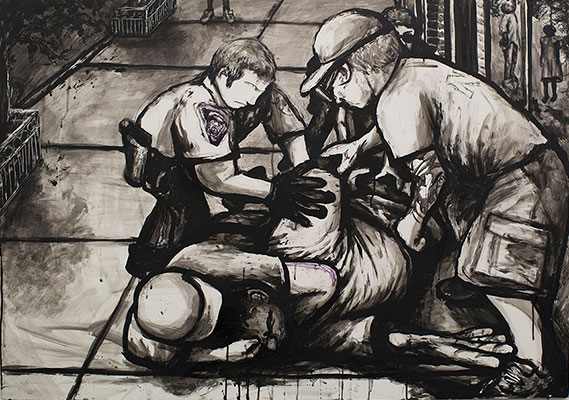 Dáreece Walker’s black and white images of instances of police brutality, racial violence, and daily micro-aggressions experienced by African Americans force a direct confrontation of issues of social injustice. Rendered in a classical style, the images bear the weight and the grace of history.  He writes, “I was told as a boy, from family and teachers and other adults, ‘Your life will be harder because you are a Black man’. If that’s true, then I must strive to make the world better for the next generation of Black men, so that a lack of self-confidence and discrimination can no longer be a hindrance. I’m inspired by the future, and what can be.”

Force/Resistance: From Standing Rock to Colorado Springs presents stories and reflections from area residents who have participated in the protest actions against the Dakota Access Pipeline, a 1,134-mile pipeline to carry crude oil from western North Dakota to southern Illinois. The planned route crosses the Missouri River, threatens both clean water and ancestral burial grounds.