For nearly two decades, Virgil Ortiz has told the story of the 1680 Pueblo Revolt through his artwork, and simultaneously makes it more relevant and engaging to the next generation by using contemporary art to blend historic events with sci-fi fantasy – think Star Wars, Prometheus, The Avengers, and Justice League. His material choices and techniques draw from the past, while his imagery is both ultramodern and futuristic.

Ortiz’s Revolt storyline transports the viewer back more than 300 years to the historical events of the 1680 Pueblo Revolt, and then hurtles forward through time to the year of 2180 – introducing a cast of characters along the way. Though the narrative will be largely based on the Revolt 1680/2180 storyline that the artist has been developing for some time, Revolution will focus on the Aeronauts and other main Revolt characters: Po’Pay, Translator and the Spirit World Army, Tahu and her army of Blind Archers, Runners, and Gliders. Set in the future of 2180, the pueblos are in chaos, the invasion of Native land continues, the scourge of war rages everywhere. The Aeronauts summon their fleet and prepare for extreme warfare against the invading Castilian forces. Desperately, the Aeronauts search for any remaining clay artifacts from the battlefields. They know that challenges and persecution will continue, so it is imperative to preserve and protect their clay, culture, language, and traditions from extinction.

Hailing from a family of celebrated Pueblo potters, Ortiz moves into a new era combining art, fashion, video, and film at lightning speed. Ortiz, who works and lives in Cochiti Pueblo, New Mexico, is one of the most innovative potters of his time. His exquisite works are exhibited worldwide in museum collections that include the Stedelijk Museum ‘s-Hertogenbosch, The Netherlands; Fondation Cartier pour l’art contemporian, Paris; Smithsonian Institution’s National Museum of the American Indian; Virginia Museum of Fine Art; and the Denver Art Museum. Ortiz is the fall Andrew W. Mellon Artist-in-Residence for the Colorado Springs Fine Arts Center at Colorado College.

Through May 19, 2019 in this consolidated exhibition. View More 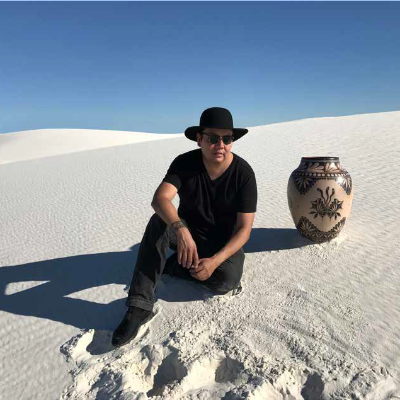 “Internationally renowned for his pottery, Ortiz is preparing for “Revolution,” an exhibition of pottery, glass, fashion, video and more opening in October at Colorado College in Colorado Springs…

“Revolution” is partly an outgrowth of a 2015 show staged at the Denver Art Museum. The exhibit will feature nine objects in the museum’s permanent collection, expanding into the animal figures inherent in Ortiz’s current work.”

BTS of ReVOlution - Rise Against the Invasion

Join Cochiti Pueblo artist Virgil Ortiz in this hands-on workshop as he demonstrates and instructs the clay-working processes he uses to create his exquisitely smooth and finely detailed ceramic head and shoulders forms. Atop a simple armature base, and under Virgil’s watchful eye, participants will work towards creating their own sculptural busts. Some clay experience required. Ages 16-Adult

Working with soft foam to create a hard look, artist/fashion designer Virgil Ortiz instructs the participants of this workshop the methods he uses to construct his amazing Aeronaut Armor. Demonstrating the designing, cutting, shaping, heat-forming, and finishing steps, Virgil will help students complete their own versions using this awesome process. No previous experience required. Ages 16-Adult

This program is part of the For Freedoms 50 State Initiative developed to spur greater participation in civic life by generating discussion of values, place and patriotism through the arts.