“The hardest I’ve ever laughed in my adult life was at a Gilbert Gottfried joke.”
– Doug Elfman for the Las Vegas Review Journal

As a famed comic’s comic, Gottfried puts aside political correctness for his live performance and fires an onslaught of jokes that know no boundaries.

In 1980 Gottfried was hired as a cast member for NBC’s Saturday Night Live. A few years later, MTV hired him for a series of improvised promos. He also had several television appearances on “Late Night with David Letterman.”

Gottfried voice work includes, IAGO, in the Disney classic “Aladdin,” the duck in the AFLAC Insurance commercials, the voice of DIGIT in the long running PBS Series “Cyberchase,”  the Comedy Central series, “The Annoying Orange, the horse on “Family Guy,” Mr. Mxyzptlk in the new “Lego Batman 3 – Beyond Gotham” video game, and Abraham Lincoln in A Million Ways to Die in the West. 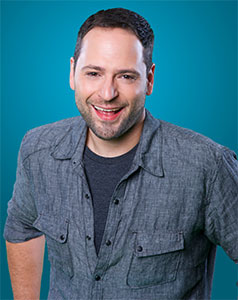 Jerry Rocha is one of the most brutally honest comedians in the industry today. His tell-it-like-it-is, no holds barred comedy grabs the attention of anyone who hears him. This Dallas, Texas native has been paying his dues since his teenage years and has performed all over the country. With his ability to find humor in every subject, including himself, Jerry proves that he is truly one of the funniest comics out there.

NOTE: Due to strong adult content, this show is intended for mature audiences only (18+).

As a theatre patron you receive discounted admission to the museum on the day of your ticketed performance.
Get access to all galleries at our membership rates.