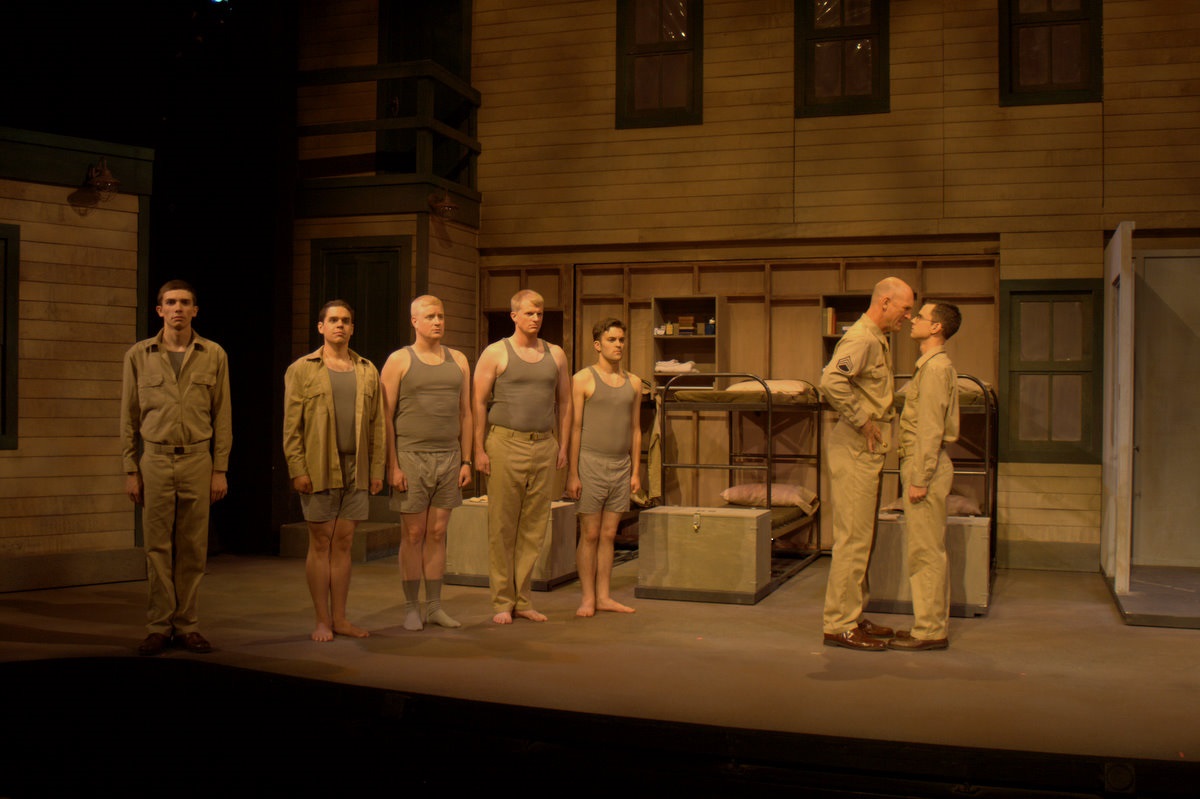 Biloxi Blues centers on the experiences of a young army recruit, Eugene Morris Jerome, during World War II. At basic training in Biloxi, Mississippi, Eugene is determined to use his army experiences to help his writing career and keeps detailed memoirs about his experiences. Eugene and his fellow soldiers-in-training suffer under a hard-nosed drill sergeant, attempt to stomach the terrible army food served up in the mess hall, and bond over an adventure to visit the local prostitute. Along the way, Eugene is forced to learn about authority, danger, sex, assimilation, bigotry, homosexuality and love. In the process, he discovers that life can be both ugly and tender.

“Biloxi Blues was a solidly enjoyable challenge from start to finish. Great to work with Alan Osburn whom I had worked with at the Denver Center. And the first time for me to work with Carmen Shedd and Marco Robinson, super talented high school actors at the time.  A brilliant script, the challenge was to play a stern, harsh, military disciplinarian who cleverly instills a sense of self and confidence in Arnold and Jerome, two intellectuals stuck in the army. Hilarious and beautifully human.  One of Simon’s best.” – Mark Rubald, Sgt. Merwin J. Toomey 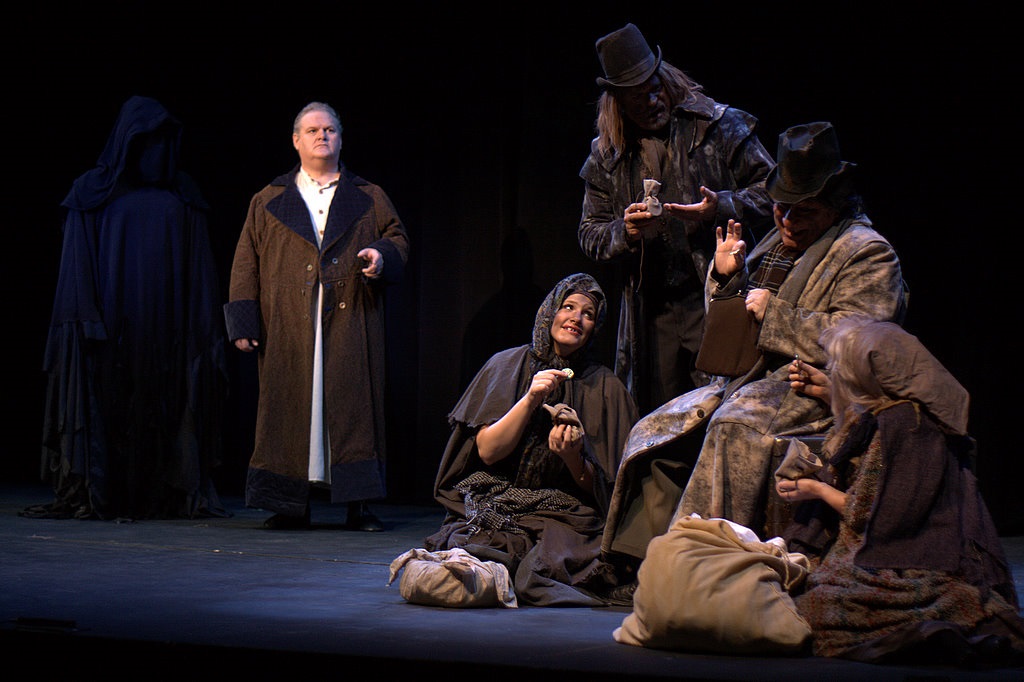 Ebenezer Scrooge is a prosperous curmudgeon who believes that personal wealth is far more valuable than the happiness and comfort of others. With an infuriated “Bah! Humbug!” Scrooge summates his feelings of Christmas tidings and charitable giving, but he’s forced to face his selfish ways when three ghosts on Christmas Eve lead him through his Past, Present and Future. Thanks to their guidance, Scrooge recognizes his faults and greets Christmas morning with a cheerful “Happy Christmas” before spending the day reconnecting and sharing love with those that mean the most to him.

Pictured (left to right): Rex Bennett as Christmas Future, John Rogerson as Ebenezer Scrooge, and the Ensemble of “A Christmas Carol”

“Christmas Carol was one of my personal favorite shows as it was one of the first ones, I got to participate in at the FAC. It was incredible to build such a tight knit little family during the run and was made extra special because I got to be in it with my mom and older brother. The show itself really puts into perspective the true meaning of the holiday season, and hopefully gave audiences pause to think about what’s really important.” – Mallory Hybl, Tiny Tim 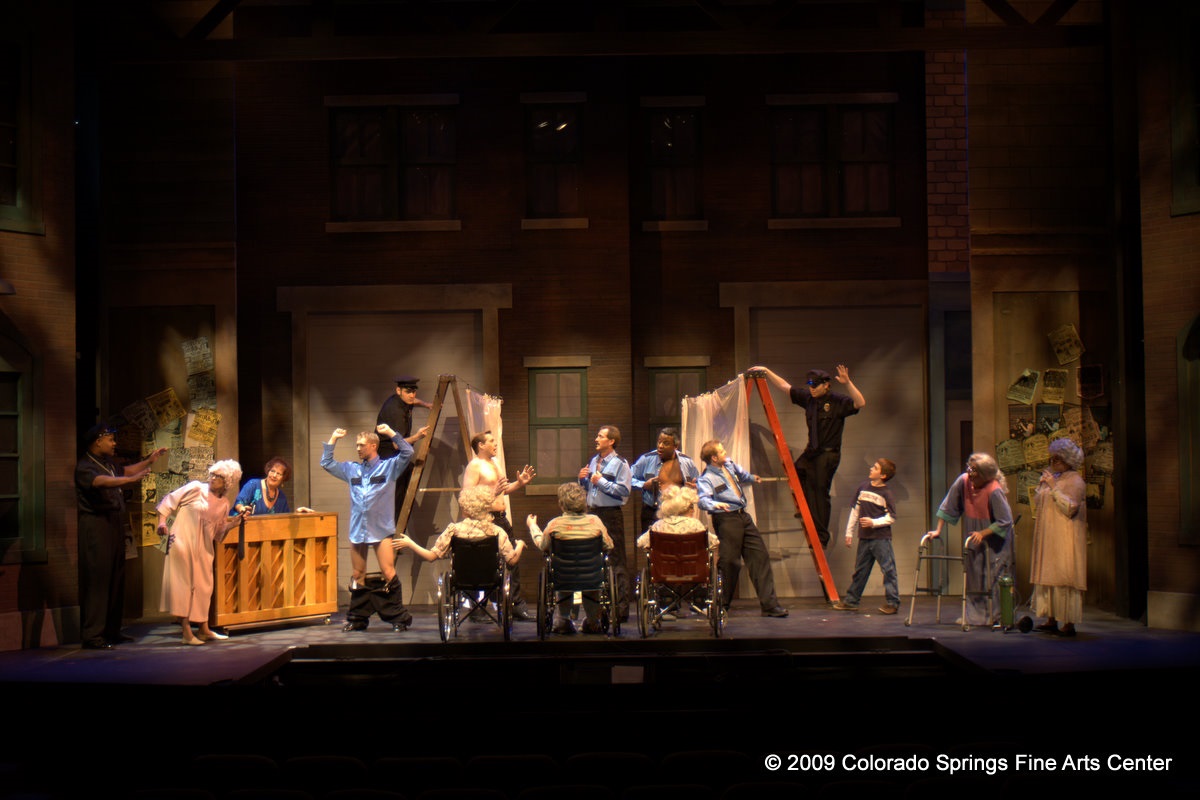 Music and Lyrics by David Yazbek
Book by Terrence McNally

While spying on their wives at a “Girls’ Night Out,” a group of unemployed steelworkers from Buffalo sees how much they enjoy watching male strippers. Jealous, out of work and feeling emasculated, the men come up with a bold and unclothed way to make some quick cash. In preparing, they find themselves extremely exposed; not merely physically but emotionally. As they conquer their fears, self-consciousness and prejudices, the men come to discover that they’re stronger as a group, and the strength that they find in each other gives them the individual courage to “let it go.”

Pictured: Nick Madson as Jerry Lukowski, and the Company of The Full Monty

“This show was a fun time. I remember being surrounded by a great team and hilarious actors. One of my fondest memories was being asked to find someone to play the professional male stripper. I convinced a student/friend of mine to take the role and I choreographed an “authentic” male strip tease. At the first reveal of the dance at rehearsal, eyes bugged and jaws were left on the floor. Folks never stopped thanking me for finding him!” – Mary Ripper Baker, Choreographer 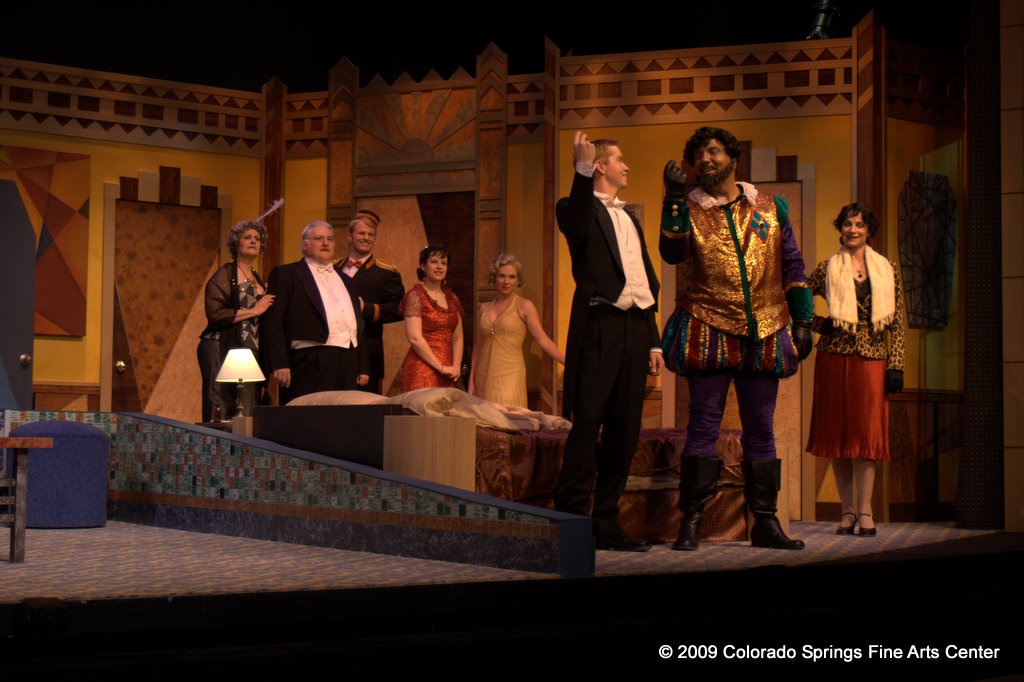 Lend Me A Tenor

Lend Me A Tenor is set in September 1934. Saunders, the general manager of the Cleveland Grand Opera Company, is primed to welcome world-famous singer Tito Merelli, known as Il Stupendo, the greatest tenor of his generation, to appear for one night only as the star of the opera. Tito arrives late, and through a hilarious series of mishaps, he is given a double dose of tranquilizers and passes out. His pulse is so low that Saunders and his assistant Max believe he’s dead – and in a frantic attempt to salvage the evening, Saunders persuades Max to get into Merelli’s costume and fool the audience into thinking he’s Il Stupendo. Max succeeds and lives up to his idol, but Merelli regains consciousness and gets into the identical costume, ready to perform. Now two opera singers are running around in the same costume and two women are running around in lingerie, each thinking she is with Il Stupendo.

Pictured: (foreground, left to right) Brian McClure as Max and Thaddeus Valdez as Tito Morelli, and the Company of Lend Me A Tenor

“As with Moon Over Buffalo, Ken Ludwig’s brilliant writing provided the scaffold for the perfect comedy. But the devil is in the details: it took a comedic-expert director like Cory Moosman to put the pieces of a surprisingly complicated production together, and Alan Osburn’s deft artistic direction to make sure the pieces cranked like a well-oiled machine. It’s a show about doors. Slamming doors, opening doors, many, many doors. The timing of the doors opening and closing, with characters careening in and out of them, had to be a tightly choreographed and tirelessly rehearsed. The whole play is a fugue: a contrapuntal composition of two or more voices — and in this case, bodies — hurling through space on top of, around, and in harmony with, one another, usually set to music. Playing the mercurial Italian Maria, wife to bel’ amore mio, Thaddeus Valdez was, naturally, one of my favorite-ever theatrical experiences.” – Amy Brooks, Maria 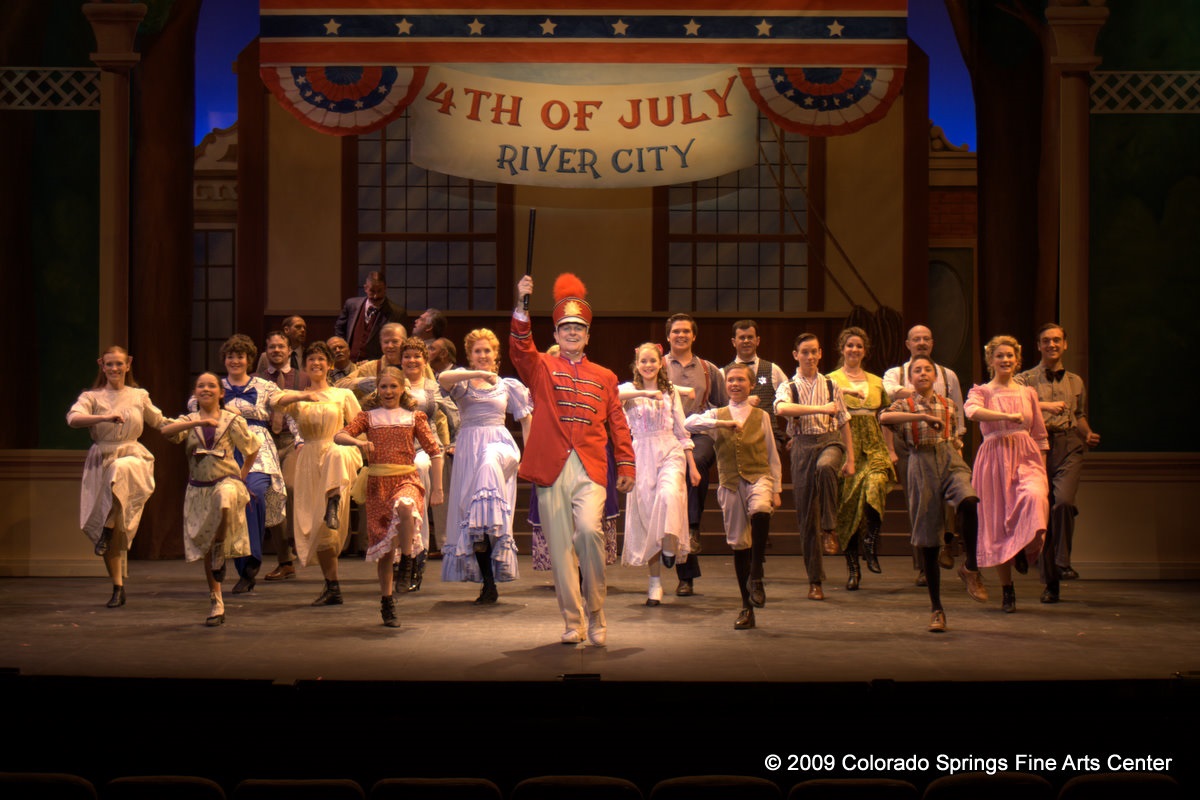 In a Gotham-like city, a terrible water shortage, caused by a 20-year drought, has led to a government-enforced ban on private toilets. The citizens must use public amenities, regulated by a single malevolent company that profits by charging admission for one of humanity’s most basic needs. Amid the people, a hero decides that he’s had enough and plans a revolution to lead them all to freedom!

Pictured: Michael E. Gold as Harold Hill, and the ensemble of The Music Man

“The Music Man was my first foray into professional theatre, and I feel so lucky to have worked on this classic piece while learning from masters of the craft. Directed by Cory Moosman and choreographed by Mary Ripper Baker, the production featured a stellar cast spanning generation and packed with talent. From performing soft-shoe choreography in ‘Marian the Librarian’ beside the inspiring Michael E. Gold as Harold Hill, to dancing ‘The Shipoopi” sang by the legendary Jimmy Ferrarro, and reveling in the vocal talents of the real barbershop quartet or the iconic Sally Hybl as Marian; this musical darling proved to me that musical theatre is a part of a larger American cultural experience that unites generations of audiences and performers alike.” – Ryan Miller, Ensemble 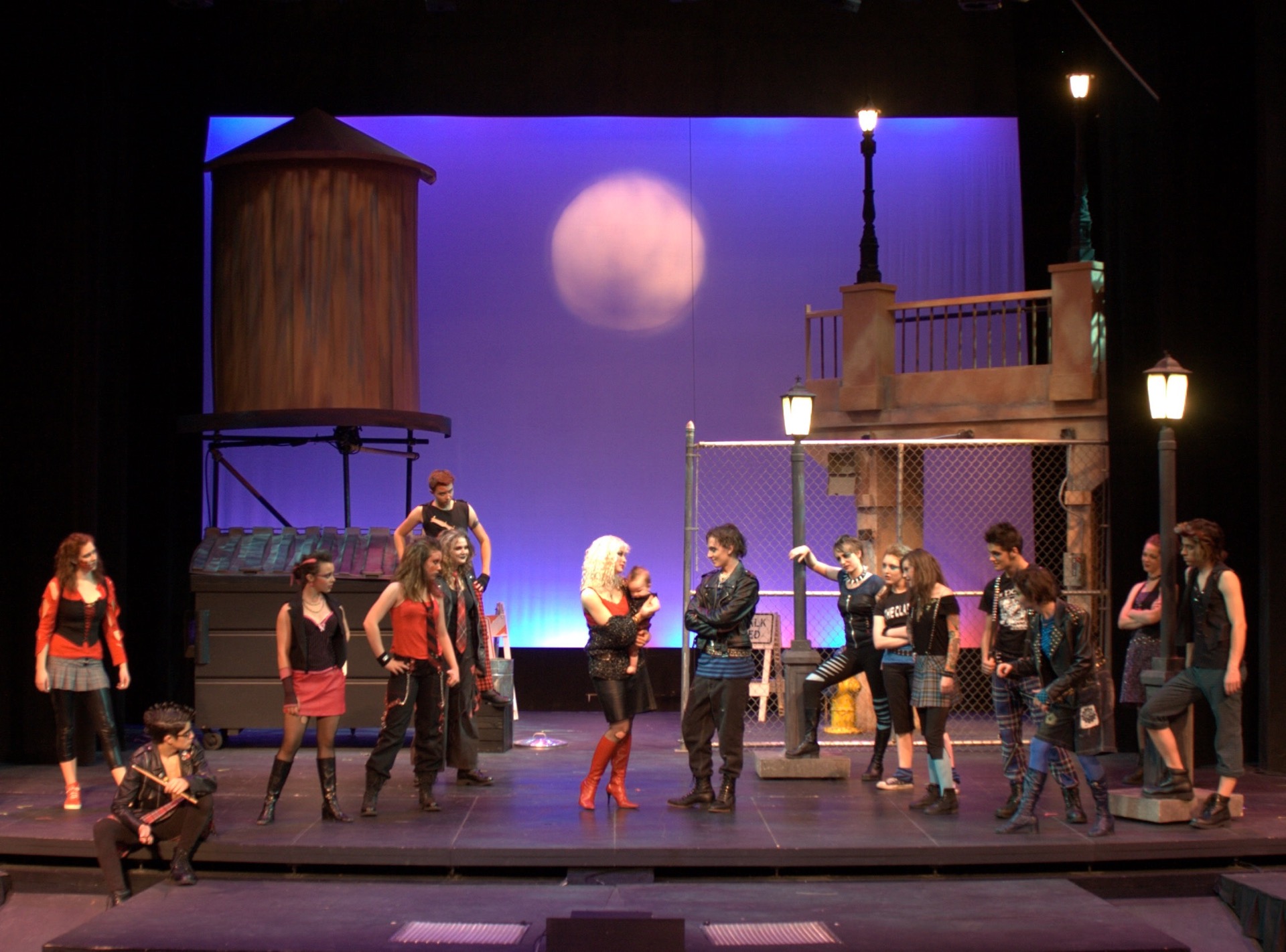 Set in a 1970’s Steam punk and flower child aesthetic. A story of order and disorder, reality, appearance, love and marriage. Theseus, Duke of Athens, and Hippolyta, Queen of the Amazons are to be married and great celebrations are planned. Egeus brings his rebellious daughter Hermia in front of the Duke. Egeus wants her to marry Demetrius but Hermia refuses, because she’s in love with Lysander. The Duke orders Hermia to obey her father or, according to Athenian law, she must face a death penalty or enter a convent. Hermia and Lysander decide to elope that night. They confide in their friend Helena. However, she’s secretly in love with Demetrius so, hoping to win his affection, she tells him of Hermia’s plan. That night, all four lovers set out into the forest.

“This 2009 Youth Rep production of A Midsummer Night’s Dream was directed by Jodi Papproth and brilliantly costumed by Sarah Shaver. The show was performed in repertory with Cats, which allowed us a great exposure to classical Shakespeare and musical theatre, as well as extensive work in makeup and design. From what I recall, the theme was a steampunk and mid 70’s, hence Titania (my role) and Oberon were designed a la Sid and Nancy Vicious. The scene pictured takes place when the fairy king and queen are battling for custody of the changeling child (played by Sarah’s real baby Liam!) This was my final summer as a youth rep student, and provided some amazing education that I have continued to use and teach throughout my career.” – Carmen Shedd, Titania, Queen of the Fairies 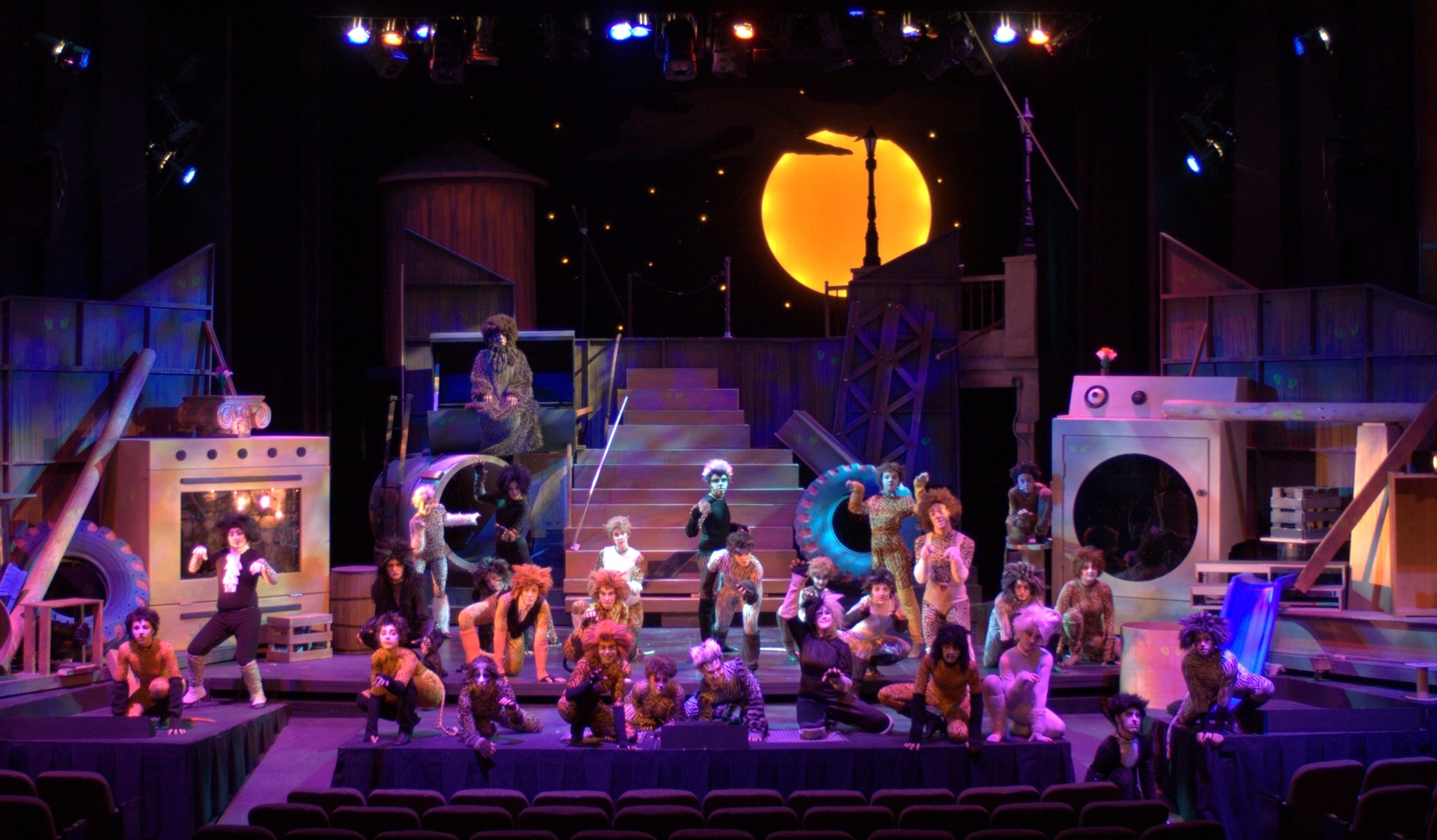 Music by Andrew Lloyd Webber
Based on “Old Possum’s Book of Practical Cats” by T.S. Eliot

Cats is set amongst a larger-than-life junkyard playground and is alive with purr-fect felines including Rum Tum Tugger, Mr. Mistoffelees, Macavity, Jennyanydots, Old Deuteronomy, Skimbleshanks and Grizabella.
The Jellicle Cats come out to play on one special night of the year—the night of the Jellicle Ball. One by one they tell their stories for the amusement of Old Deuteronomy, their wise and benevolent leader, who must choose one of the Cats to ascend to The Heaviside Layer and be reborn into a whole new Jellicle life.

Pictured: The entire company of Cats

“I still am in awe that I was cast in, and performed in, Cats. When Susan Dawn announced who’d been cast several months prior, I decided on the spot that instead of being confused over why I’d been cast, given my minimal dance skills, I’d instead work towards acquiring the dance skills to warrant my involvement. Turns out it takes more than a few months to specialize, but that show did start me on a lifelong journey building strength, proprioception, and confidence through dance and yoga (which we did each day to start out rehearsal). My memories of the show are colored by my own battles with teenage insecurity, but I remember the absolute commitment of the cast. We were doing A Midsummer Night’s Dream in repertoire, so we’d mostly forgotten what daylight looked like. Our hearts were entirely in the show: learning the cat physicality, exploring the nooks and crannies of the set, and practicing the makeup until it actually looked good. I had never been prouder of a production or more inspired by my fellow actors. It was truly magical, unlike the giant, amorphous Swedish fish (a conglomerate of many bags of regular ones) that sat on the green room table for at least half the summer.” – Becki Yukman, Etcetera 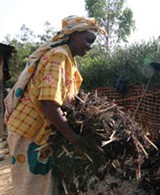 Rocky Mountain Women’s Film builds community around film by elevating the stories of women and others who are often unheard or unseen. As a women-led organization, they seek to discover, support, connect, and inspire filmmakers while cultivating connection and conversation around their work.

Pictured: A still from “As We Forgive”