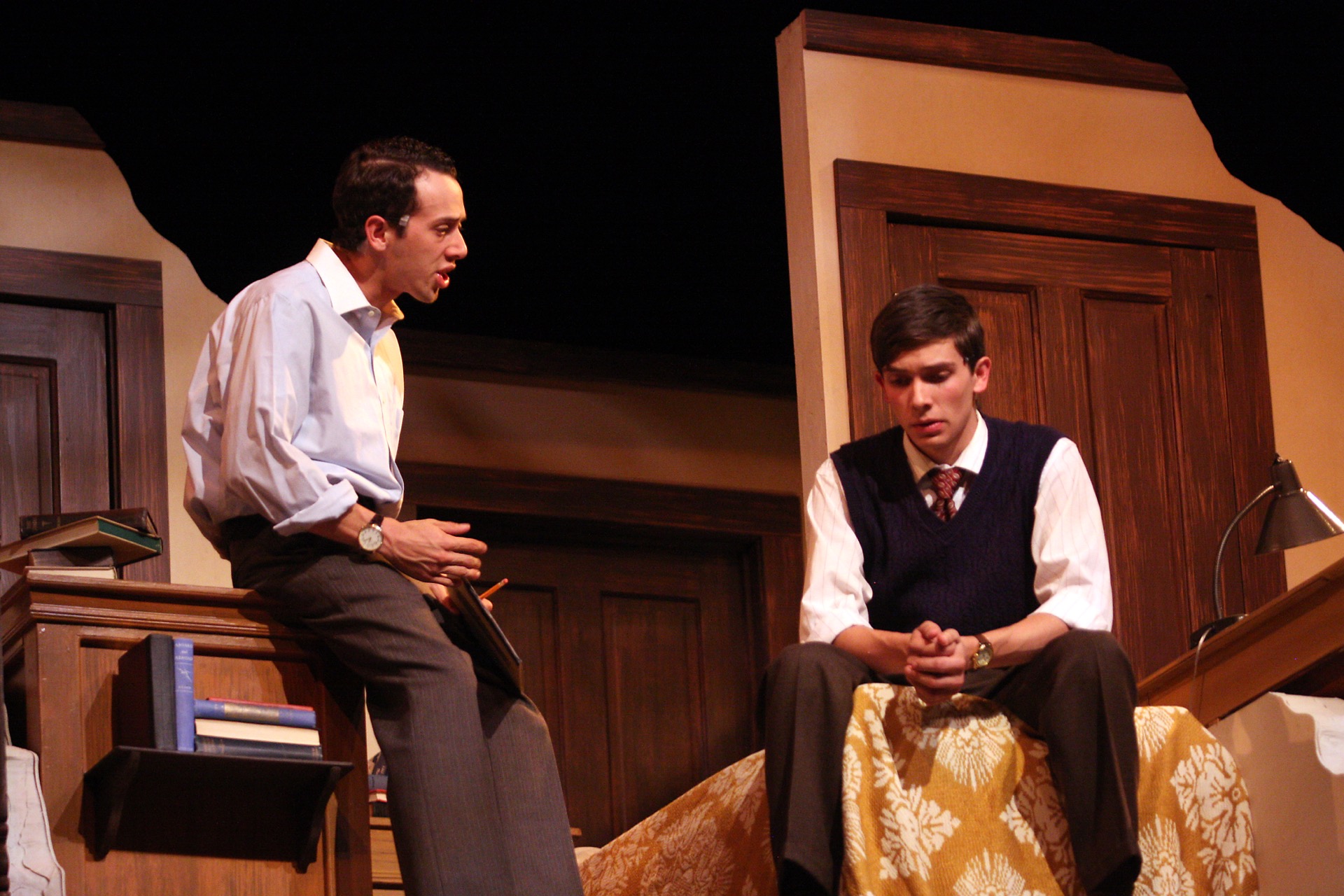 Following Brighton Beach Memoirs and Biloxi Blues, this is the poignant and funny conclusion of Neil Simon’s semi-autobiographical Eugene trilogy. Eugene and his brother Stanley are trying to break into the world of professional comedy writing, while coping with their parents’ messy and gut-wrenching split. When their material is broadcast on the radio for the first time, the rest of the family is upset to hear a comedic rendition of their own trials and tribulations. How will Eugene and his brother balance their loyalties to their family and to their art?

“I played Blanche in both Brighton Beach Memoirs and Broadway Bound. We did it a year or two apart at FAC with the same cast. It was a wonderful experience to play the same part at different times in life; to see how each character grew and changed. In Brighton Beach, Blanche was a recent widow completely dependent on my sister; in Broadway Bound, she was remarried and wealthy. The dynamics had changed. Best part of the journey was sharing it was my Theater-sister, Amy Brooks. We have played sisters in many plays, and it is always a joy.” −Jane Fromme, Blanche 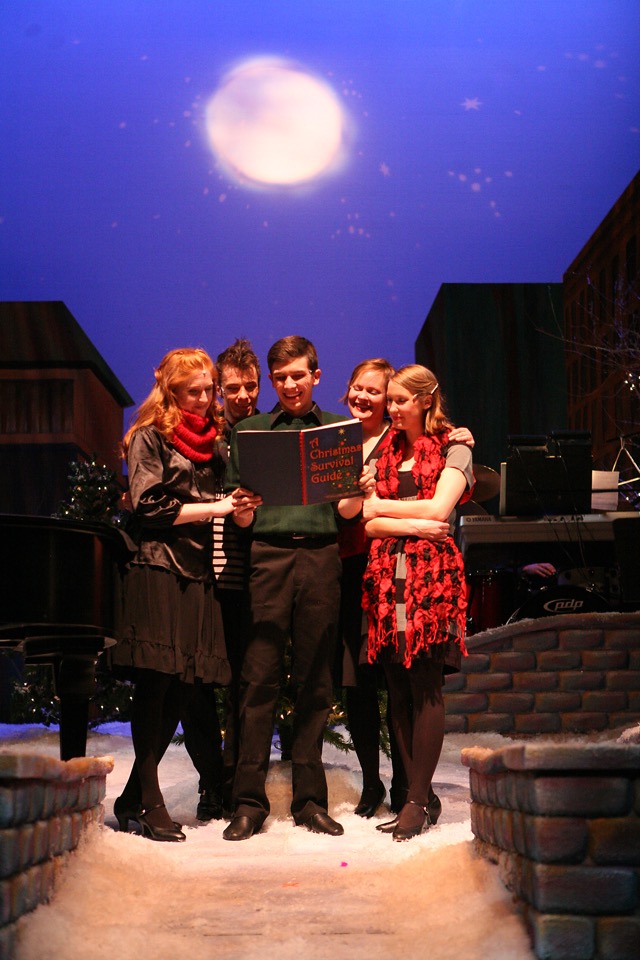 By James Hindman and Ray Roderick

A Christmas Survival Guide is a how-to-guide to enjoying the holiday season presented in songs and vignettes that are both hilarious and heart-warming.

“A Christmas Survival Guide holds a very special place in my heart. This was my first mainstage show at the FAC with a small cast and I truly loved everything about it, start to finish. The show itself is filled with laughter and has such a sweet holiday spirit that it made the cast and audience walk away with warm holiday fuzzies. What I loved most though was working with Michael Gold, our director/choreographer, and the wonderful tiny 5 person cast and small band that was on stage with us throughout the show. A talented and tightly woven group of artists working on a fun and meaningful piece!” –Halee Towne 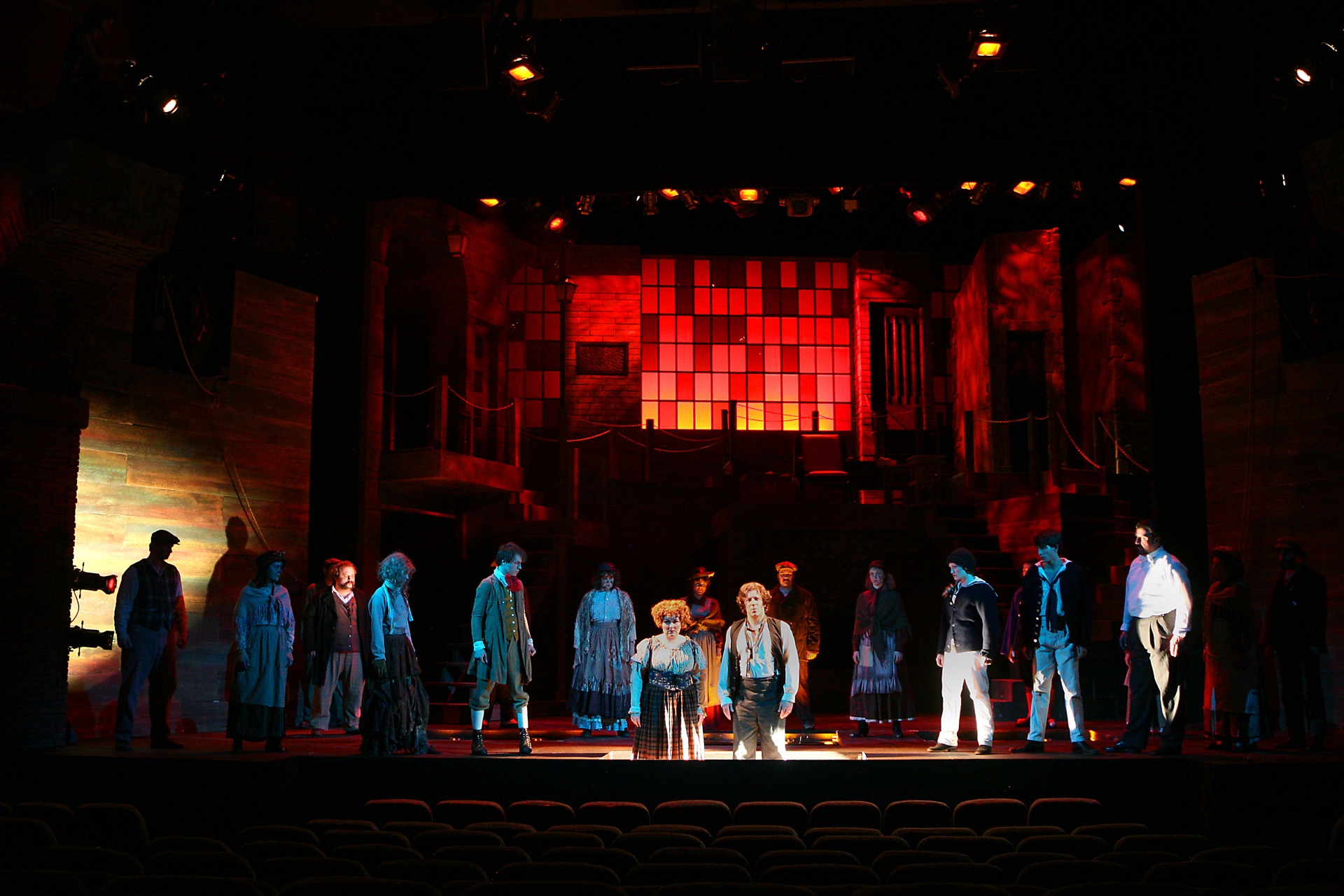 Music and Lyrics by Stephen Sondheim
Book by Hugh Wheeler

An infamous tale, Sweeney Todd, an unjustly exiled barber, returns to nineteenth century London, seeking vengeance against the lecherous judge who framed him and ravaged his young wife. The road to revenge leads Todd to Mrs. Lovett, a resourceful proprietress of a failing pie shop, above which, he opens a new barber practice. Mrs. Lovett’s luck sharply shifts when Todd’s thirst for blood inspires the integration of an ingredient into her meat pies that has the people of London lining up…and the carnage has only just begun!

“For Sweeney Todd, I designed two 30’ tall follow-spot towers in the front row of the theatre. Each tower was built from industrial scaffolding (bolted to the house walls) and wrapped in fake brick. Five minutes before the show began, the follow-spot operators would climb to the top of the towers and strap themselves in with safety harnesses.” –Christopher L. Sheley, Scenic Designer 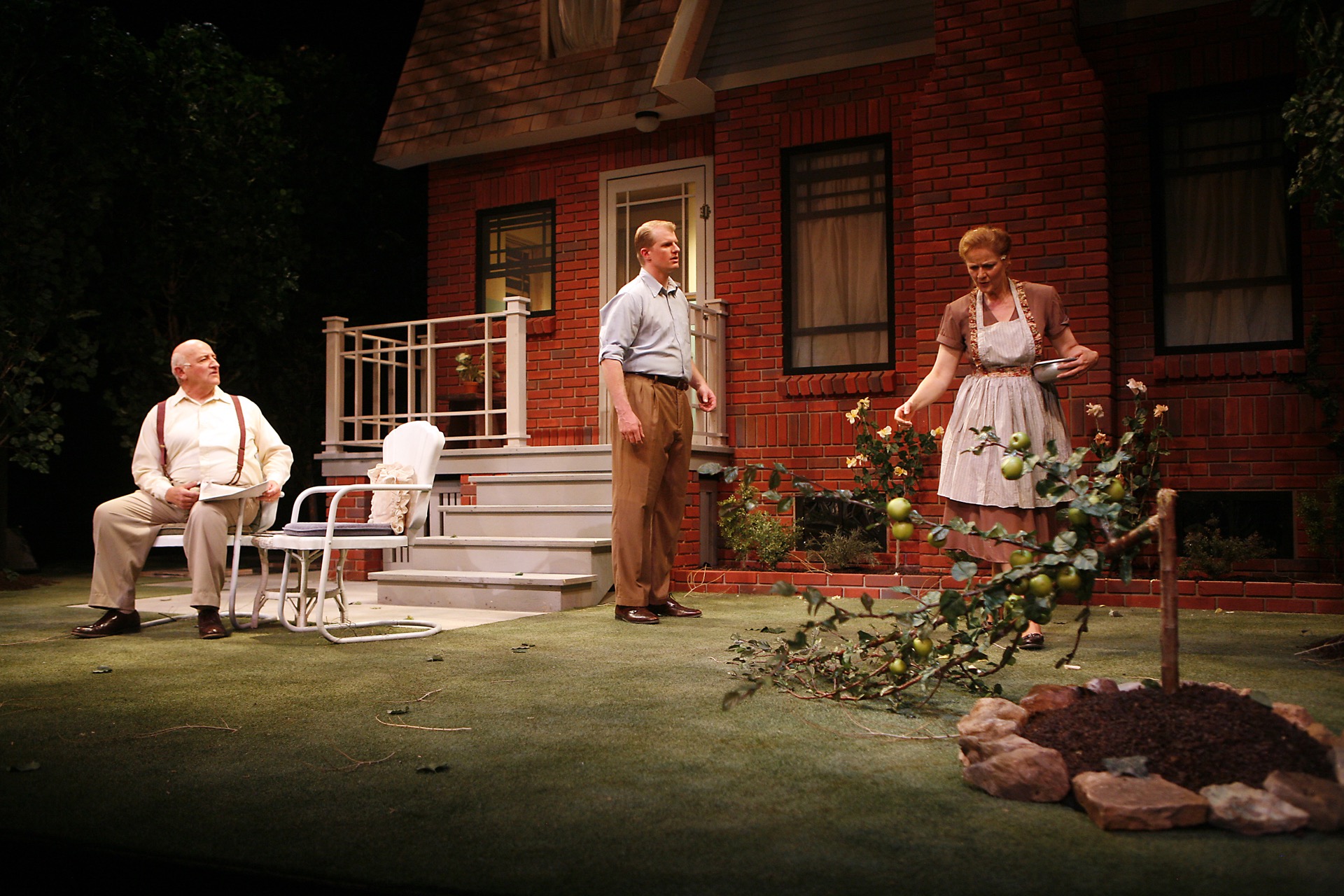 Pulitzer prize winning playwright Arthur Miller won the 1947 Tony for Best Play for All My Sons.  This is a hard-hitting story, set shortly after World War II, about Joe Keller, who became rich as a manufacturer of substandard war materials in a conflict that took one of his sons and imprisoned a colleague. Told against the setting of a suburban backyard in the 1940s, Miller’s play is a classic American drama about the idealization of a father, the loss of a son, and the secrets that destroy a family.

“In 2010, I had the great privilege for portraying Kate Keller in Arthur Miller’s All My Sons. The wonderful challenge to this part was playing the line between hope and denial. My favorite quote of Kate’s is, “That’s why there’s God. Otherwise anything could happen. But there’s God, so certain things can never happen.” Unfortunately, for the Keller family, certain things did happen. It was also a great cast Bob Moore, Carmen Shedd (what a gift) and Brantley Haines (I got to call him “my little boy” and he is anything but that).” –Jane Fromme, Kate Keller 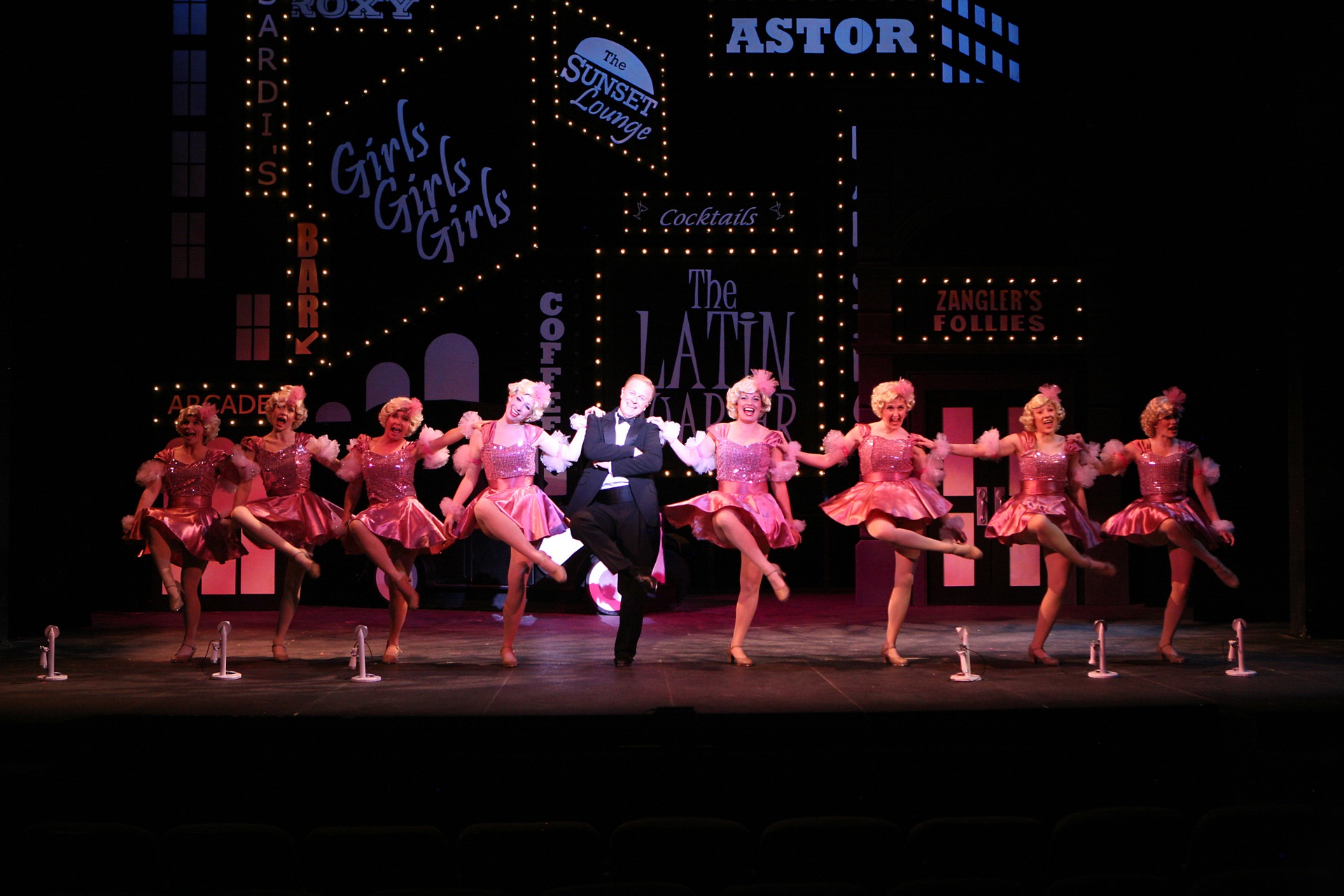 Suggested by the 1930 hit Girl Crazy, this “new” Gershwin musical is about a well-to-do young New Yorker, Bobby Child, who is sent to Nevada to foreclose on a theatre owned by the family business. Falling in love with the local postmistress, Bobby decides to produce a show to save the theatre. The production received the 1992 Tony Award for Best Musical and continues to be produced in multiple companies around the world. Crazy For You also won the Olivier Award (London) for Best Musical, 1993.

“An incredible cast, band, crew and design team. Mary Ripper Baker kicked out the original Susan Stroman choreography. This show held the FAC Theatre Company record for many years for the most single tickets purchased for a show. The best part was hearing patrons sing those fabulous Gershwin tunes and tap dancing back to their cars after giving the show a well-deserved standing ovation.” –Tim Muldrew, Director 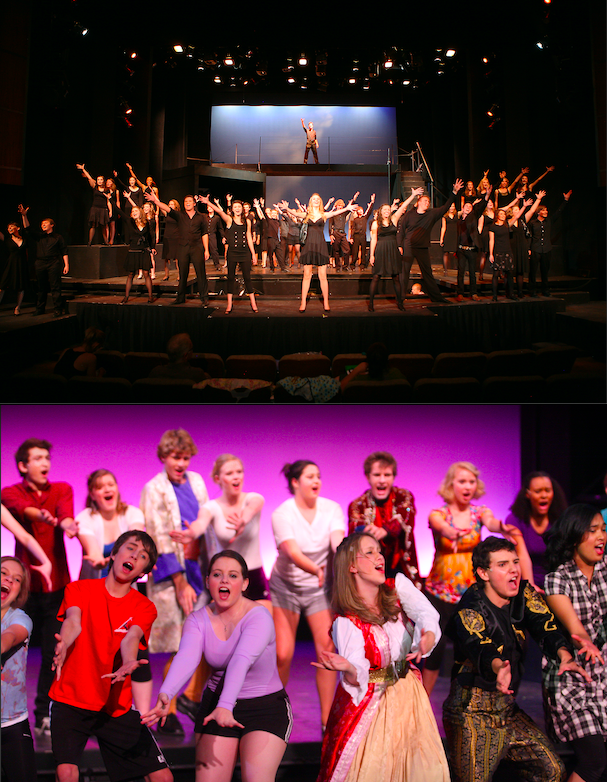 Aiming for the Stars and Art Isn’t Easy

“So there we were, sitting around a production table, discussing the possibilities for the 2010 Youth Repertory Theatre Company.  We had barely lowered the curtain (to thunderous applause) on the 2009 YRTC summer when the talks began…And these shot capture a bit of what happened with: 5 Directors, 3 Choreographers, 5 Musicians, 2 Dance Captains, a Fight Director, over a dozen Instructors, 3 Photographers, a Videographer and a Filmmaker, (breathe), a tireless Production Team, an awesome Staff, 48 Performance students and 13 Design/Tech students who each brought boundless energy and their own unique talent and perspective, (breathe again), working on 29 musical theatre selections and 22 scenes with more set pieces/sound cues/lighting cues/costumes than you would care to count. Whew. When we say ‘It takes a Company’, we mean it!  I am deeply grateful to have helped create and run this program.” –Susan Dawn Carson, YRT Program Director 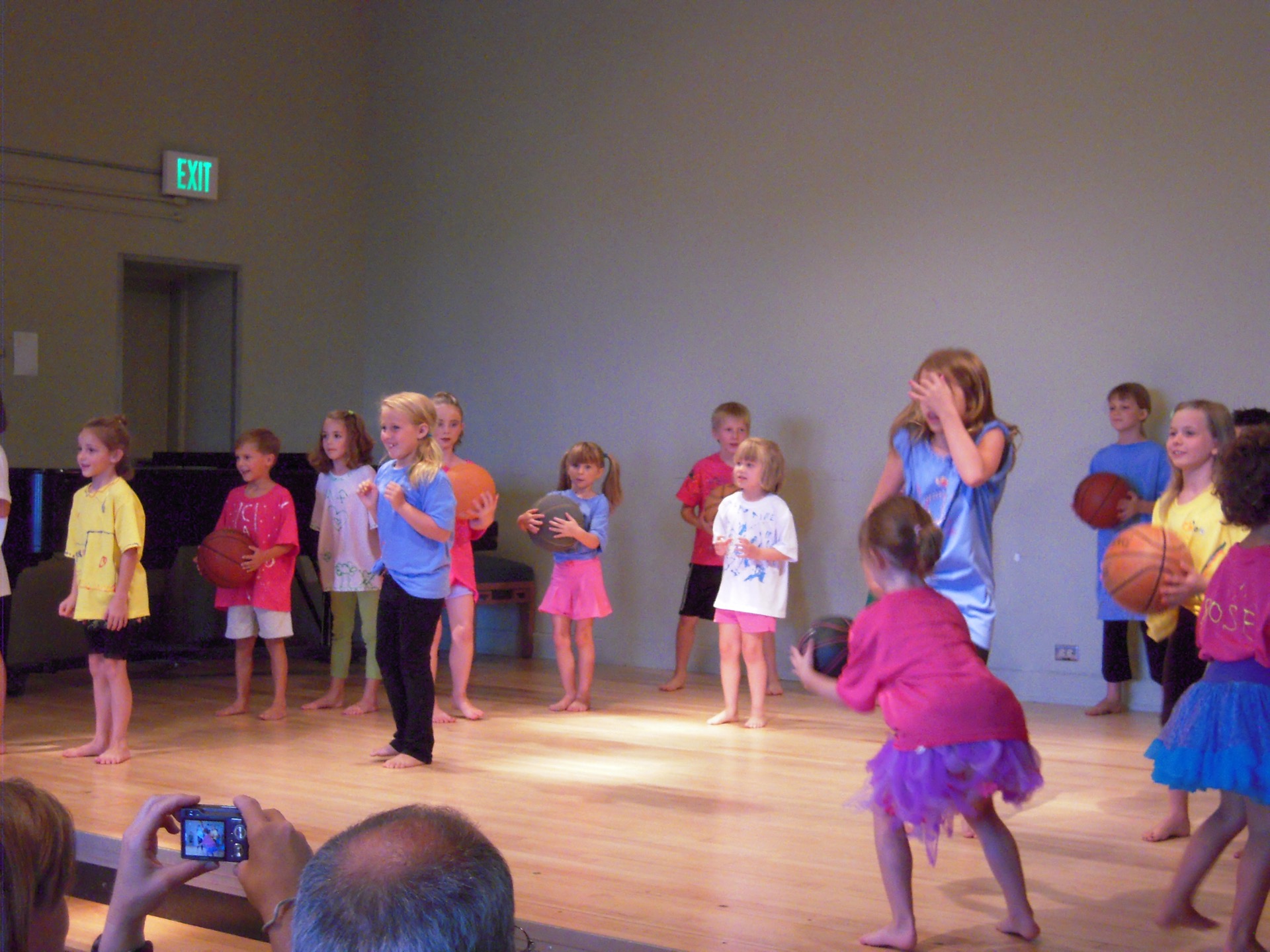 “Music Box 2010.  It’s incredible to see these kids’ smiling faces again… since I know what many of them look like 10 years later! We are all wearing our self-designed “costumes,” singing, dancing, and performing an original production which featured three amazing songs that year:  There’s No Business Like Show Business, Getcha Head in the Game and Supercalifragilistic! “High School Musical” was still the rage, so of course, the performance included some challenging choreography, complete with basketballs and a kick line!  As with all these classes, the joy of making new friends, creating a piece together, and singing and dancing our hearts out to the astonishment of our friends and family reminds us that there really is No Business Like Show Business. (And Zac Efron and Vanessa Hudgens had nothing on us!) –Sally Hybl, Music Box Program Instructor