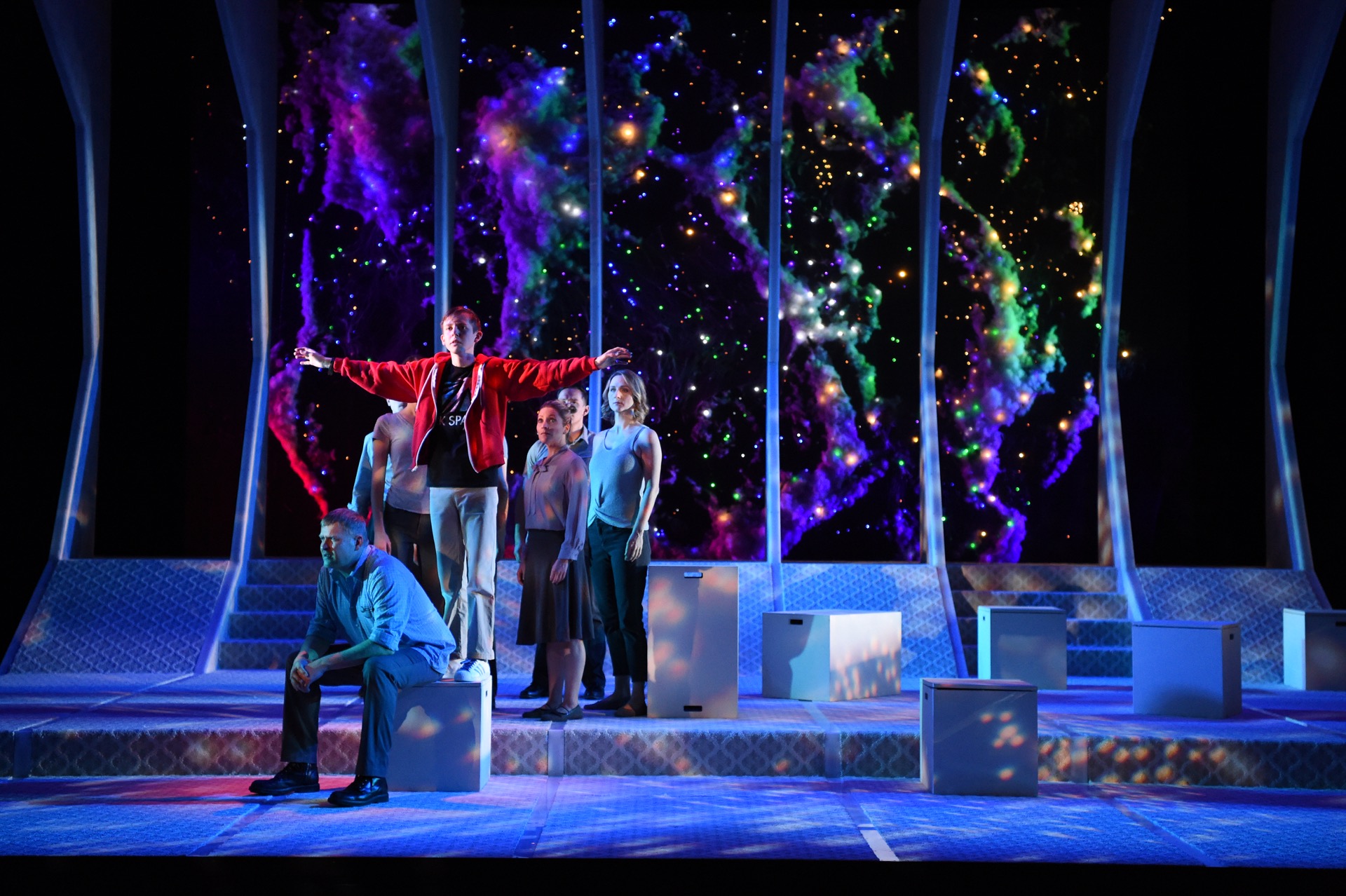 The Curious Incident of the Dog in the Night-time

Adapted for stage by Simon Stephens

Based on the book by Mark Haddon

The Curious Incident… takes a deep look at the world through the eyes, and words, of Christopher, a teenager living with autism. While Christopher prepares for college entrance exams, he begins to investigate the sudden and curious murder of his neighbor’s poodle. Despite those around him attempting to stop his investigation, Christopher starts to unravel more than what he bargained for. All the while the audience sees the struggles of everyday life that Christopher struggles through with his autism.

Pictured: Logan Riley Bruner as Christopher and the Company of “Curious Incident…” | Photo by Jeff Kearney

“The Curious Incident of the Dog in the Night-time was one of the most challenging and satisfying projects I have ever worked on. Chris Sheley’s set design was heavily influenced by his research into autism and how the autistic mind processes experiences. He created a world that made the audience feel like they were looking inside Christopher’s (the main character) brain. An element he and I worked closely on was ‘the nebula’. This was a scenic element that could reflect both Christopher’s emotions and reactions to the event happening around him as well as outer space (as thinking about space was of great comfort to him). This scenic piece was dubbed by the creative team ‘the nebula’, and its creation was a collaboration between all members of the design team and shop staff. The charge scenic Alyssa Washburn developed the cloud structure with various types of pillow fillers attached to a black netting. Scenic artist Sara Talaba and electrician Aidan Murphy wove miniature LED and conventional lights throughout the structure. Before and during technical rehearsals the design team developed a nebula language- specific ways of lighting it to help tell the story. An example of this was to flash and chase the miniature lights when Christopher was feeling stressed. Or, as pictured, like a nebula in outer space.” – Holly Anne Rawls, Lighting Designer 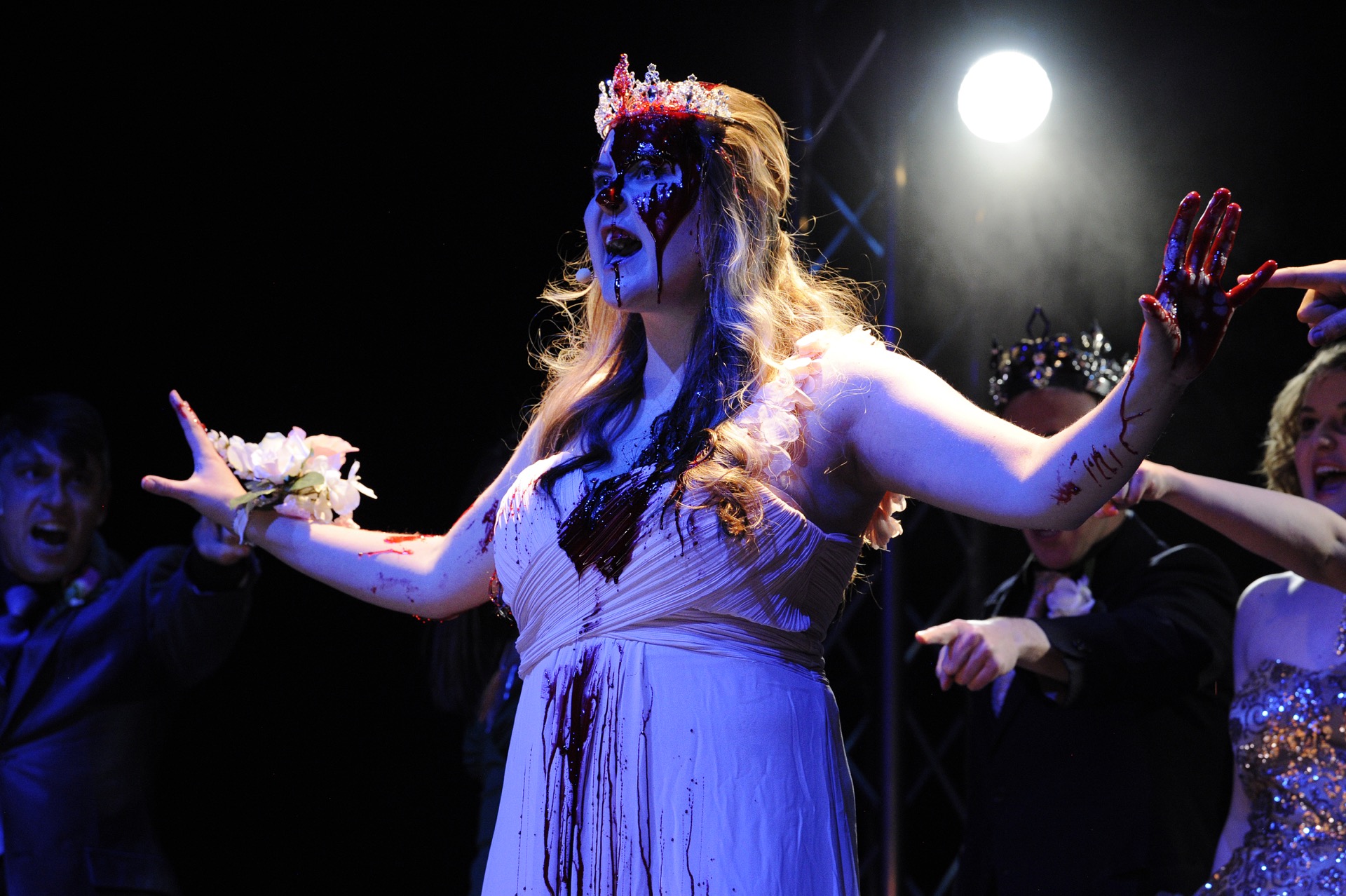 Based on the book by Stephen King

Based on the iconic novel by Stephen King, Carrie the Musical follows Carrie, a sheltered teenager as she struggles to cope with not only with a life guarded by a fanatic mother, but with her newfound telekinetic powers as well. A cult classic to be sure, Carrie the Musical is filled with scares and fun waiting to be seen!

“For our 4th annual benefit concert in support of the FAC Theatre School, we chose Carrie for a multitude of reasons:  1.  We choose titles for our concert series that are shows we doubt we will give a full production for the foreseeable future; 2.  We look for work that can feature many of our current students and recent alumni; 3. We wanted to produce something for Halloween, and this cult classic fit the bill.  In the end, we received such a wonderful response for this iteration, I wish we HAD kept it running for more than the two performances that our contract allowed for.” – Scott RC Levy, Producing Artistic Director 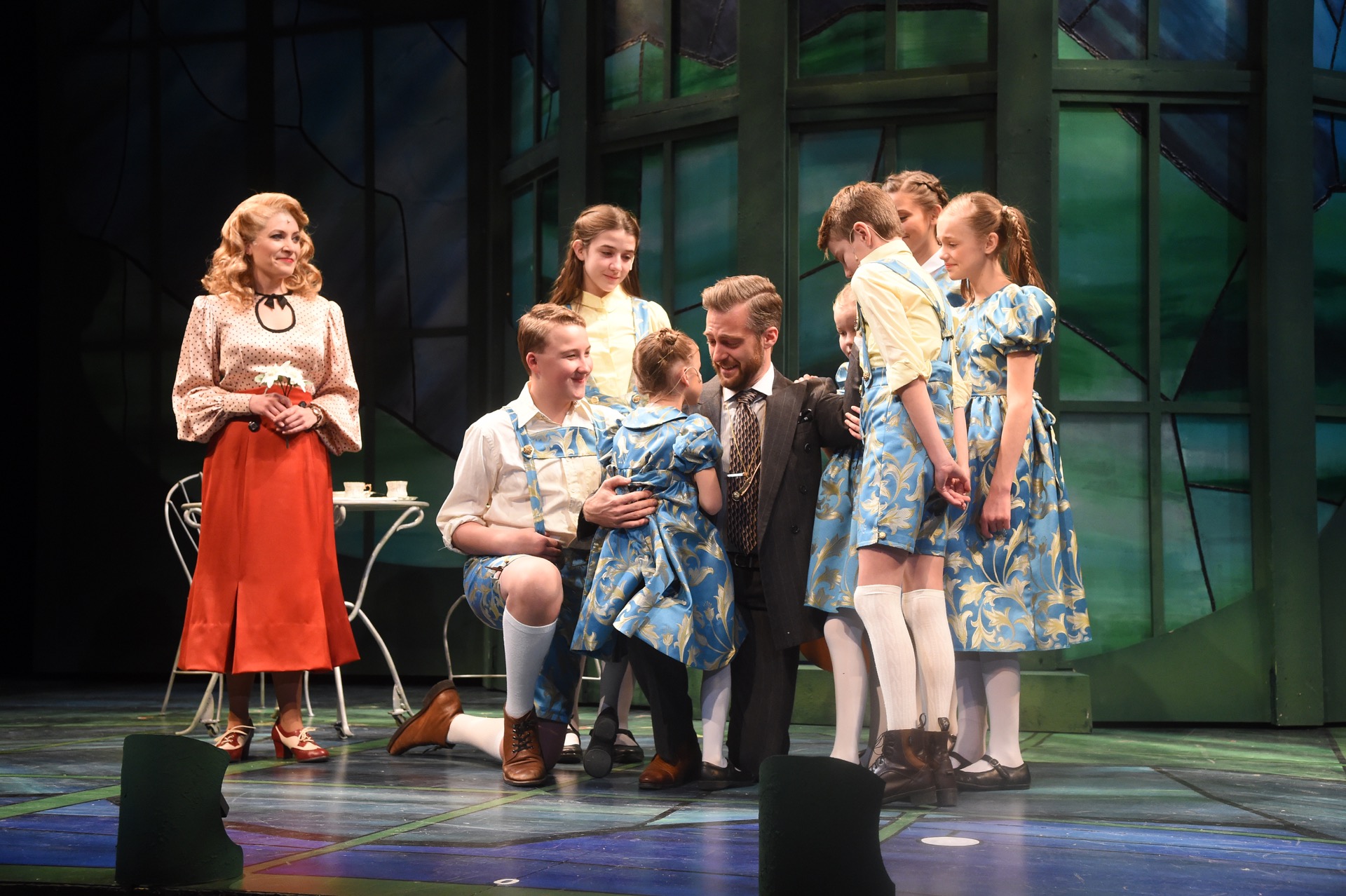 The Sound of Music

The classic film and memoir make its way to the stage. While not everyone has seen this work, everyone can sing along to songs like “My Favorite Things” or “Do-Re-Mi.” Maria, a rambunctious nun in training, becomes the governess to a large family where she falls in love with the children and teaches them to sing. Love and family are a timeless theme, and this musical has it in spades.

“Working on SOM at the FAC was a lovely collaboration from start to finish, a talented group of artists on stage and behind the scenes.  Nathan cast a lovely group of actors/singers/dancers, which made working in rehearsals with them very smooth.  Behind the scenes, the shops were dreamy, such a wonderful attitude of leaning into the production design ~ jumping in on research and development of ideas, trouble-shooting, and working to maximize the time and budget that we had available for this production.  The stained glass looked great and worked great for the production.  The movement of the scenery was transformative for the cast and audience alike and made for thrilling live theatrical event.  When I started this production concept, it was from being drawn into the beauty and magic of the Rogers & Hammerstein music/book and the beauty of the Austrian Alps.  I was struck, daily, walking into the FAC our glorious Front Range, and couldn’t help think of Maria’s love for nature’s beauty.” – R. Eric Stone, Scenic Designer 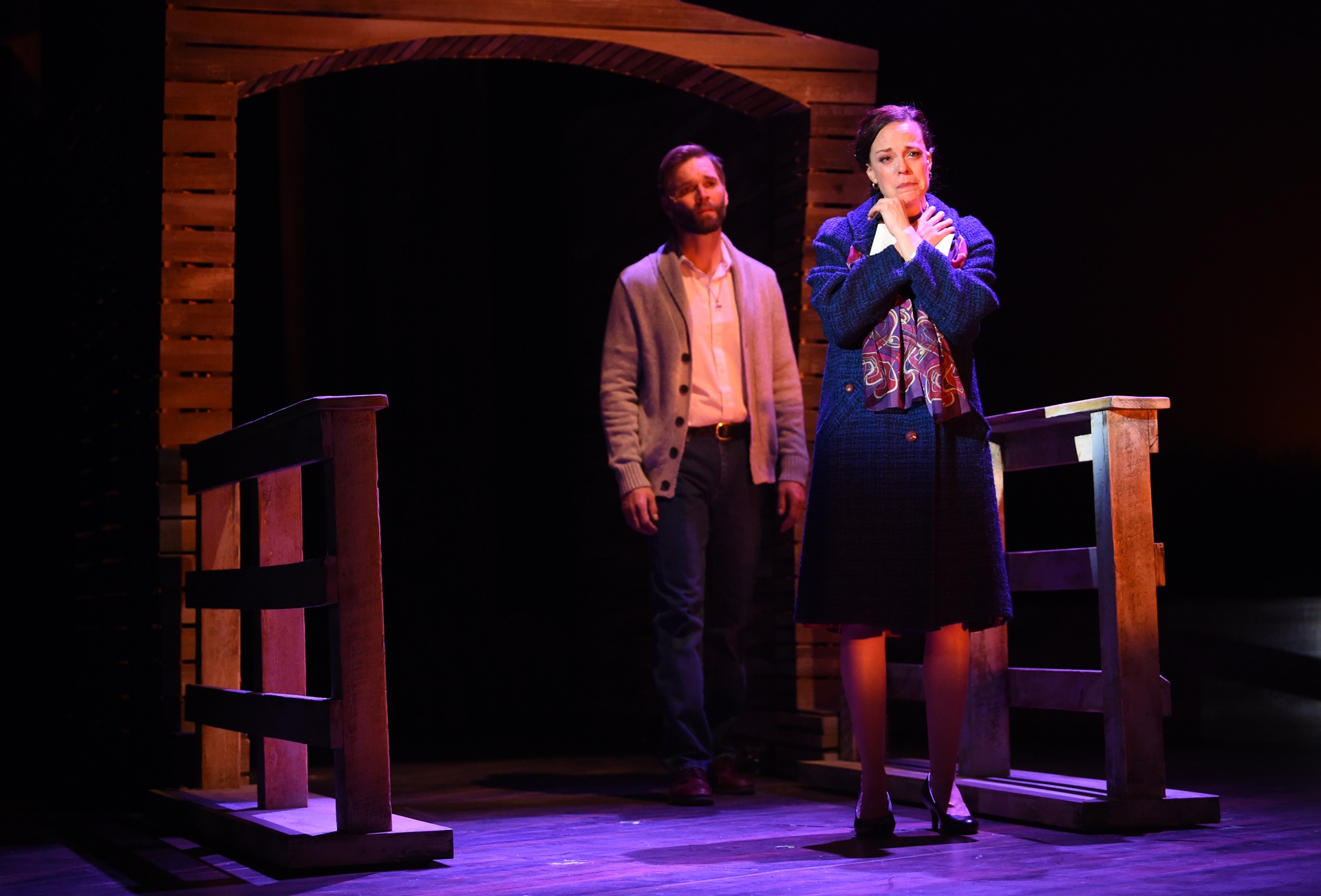 The Bridges of Madison County

Adapted for the stage by Marsha Norman

Based on the book by Robert James Waller

Francesca Johnson married into a quiet midwestern life to escape war torn Italy, but finds after years, that this life might be too quiet for her. While her family is away to the national 4-H fair, what was supposed to be a quiet weekend turns into more when Robert Kincaid pulls into her driveway. Robert is a photographer for National Geographic here to capture the beauty of the covered bridges in Madison County. They both find something more than what they were looking for. This recent Tony award winning show is best known, as many state, for its music.

“What drew me in initially to Bridges was, of course, the music.  The score is both grand and sweeping, almost overwhelming at times, but also delicate and simple.  My main intent was to create a grand, sweeping vista as our overall environment, while being able to iris-in on more delicate, intimate moments.  As a memory play, each element had to have specificity to it.  With this in mind, I wanted every element to be abstract—a glimmer of a memory of what was.  That’s why everything had the same architectural themes, and each set was built of existing elements in Francesca’s world.  Her immediate world of her kitchen was the only scenic element that was fully fleshed out.  Similarly, it was important to create a visual representation of the clashing of two worlds.  To me, Francesca, in her yellows and gold tones represented the earth—stable, grounded, part of the world around her.  Robert, in his shades of blue, represented the sky—what’s beyond, ephemeral, out of reach and yet all around us.” – Lex Liang, Scenic and Costume Designer 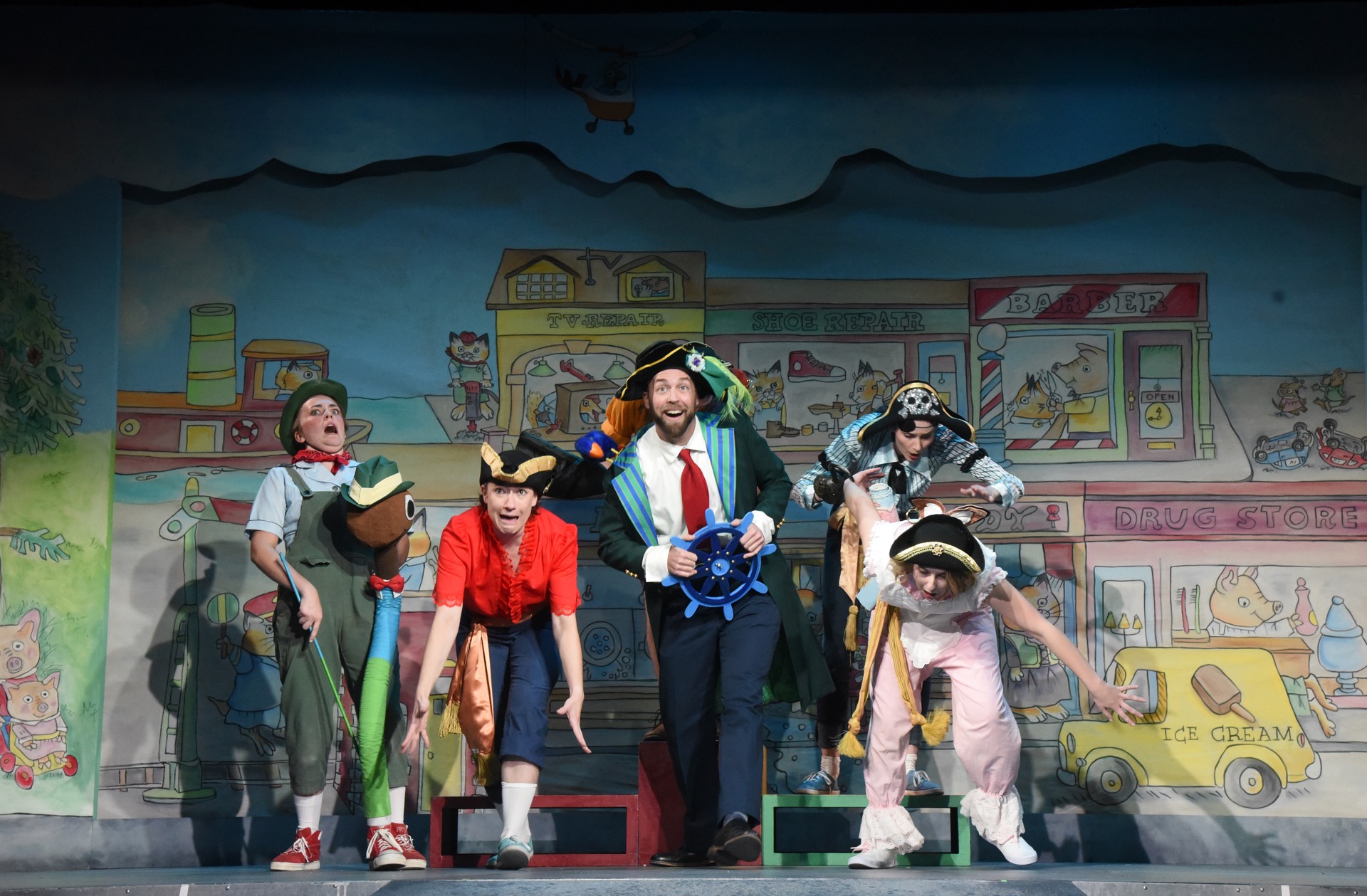 Adapted for the stage by Kevin Kling

Based on the Books of Richard Scarry

“What do people do all day?” Based on the children books by Richard Scarry, this musical brings all of the residents of busy town to life! Huckle the Cat spends his day asking questions and meeting all the characters we have come to know and love. Baking, fire safety, and even a birthday are just some of the adventures Huckle goes on!

Pictured: The Company of Busytown | Photo by Jeff Kearney

“Translating Richard Scarry’s beloved illustrations from the page to the background of a lively performance was a real treat. I cherished getting to know each character and their role in Busytown as they were chalked, painted, and outlined. When your day job includes making a pickle car with Bob Hill, Terri Harrison, and Mickey Burdick, life looks pretty good!” – Alyssa Washburn, FAC Charge Scenic Artist 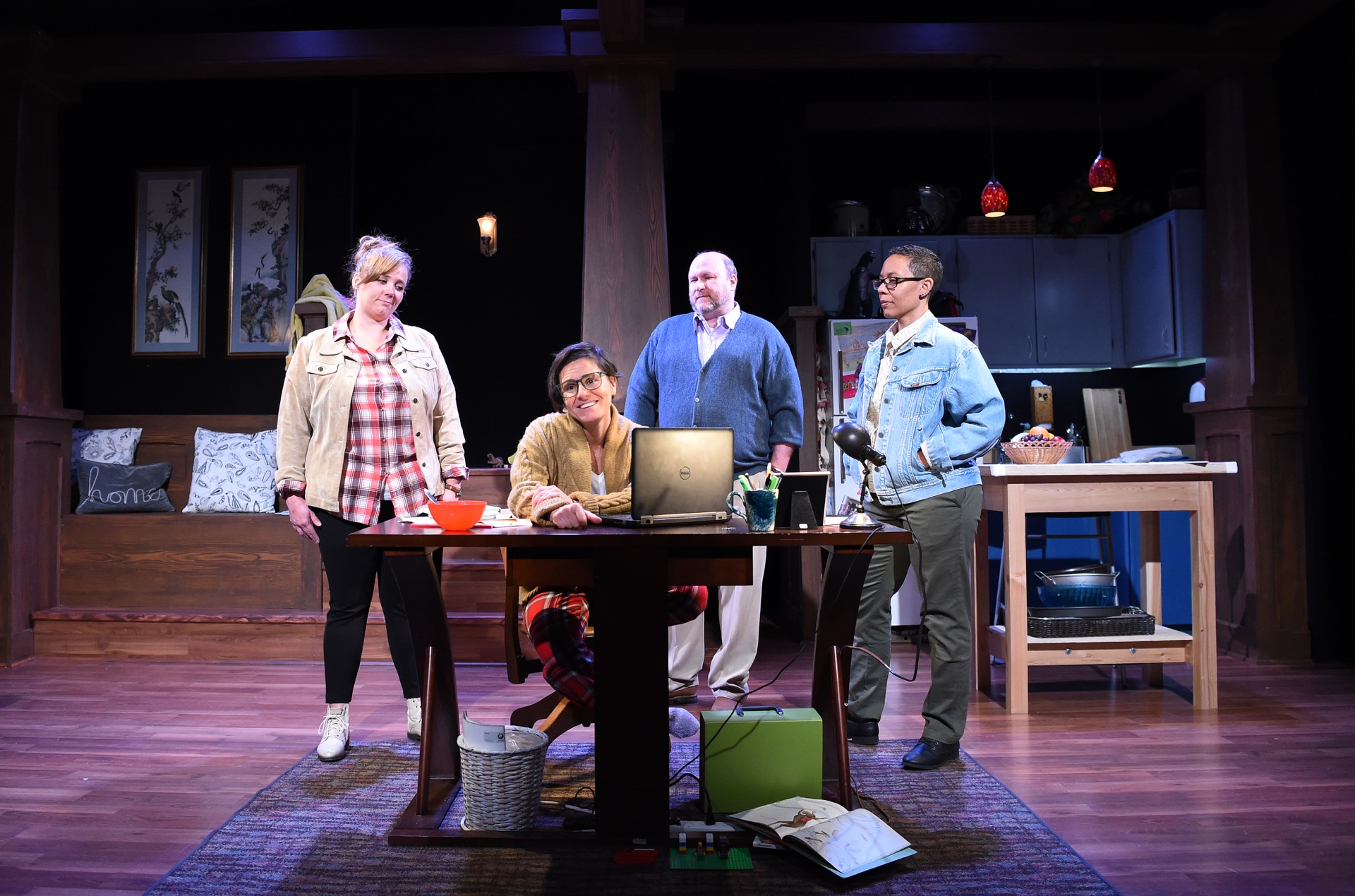 Adapted for the stage by Nia Vardalos

Based on the Book by Cheryl Strayed

Based on the book by Cheryl Strayed, Tiny Beautiful Things follows Sugar, a columnist who tries to help her readers through their hard times by using her own personal experiences. Reaching out is a difficult thing to do, and sometimes there aren’t answers to the questions you have when you do find the courage to reach out. Sugar’s advice helps these writers through problems big and small.

“‘We are Sugar and Sugar is us.’ That was the beginning conceit for Tiny Beautiful Things. Director Christy Montour-Larson wanted an immersive, shared experience for the actors and audience. She felt the setting needed to be familiar, warm and comforting while allowing for multiple rooms to be viewed at once. To create this world on a small stage, I designed the walls of the set as black fabric…a little abstract, but it allowed for visual distance between locations. Then I sought to connect all of the locations (including the audience) with a skeleton of wooden beams and columns like that of a Craftsman bungalow. Add in Holly Rawl’s lighting and the audience was able to connect with individual performers or the entire cast on the set.” – Christopher L. Sheley, Scenic Designer 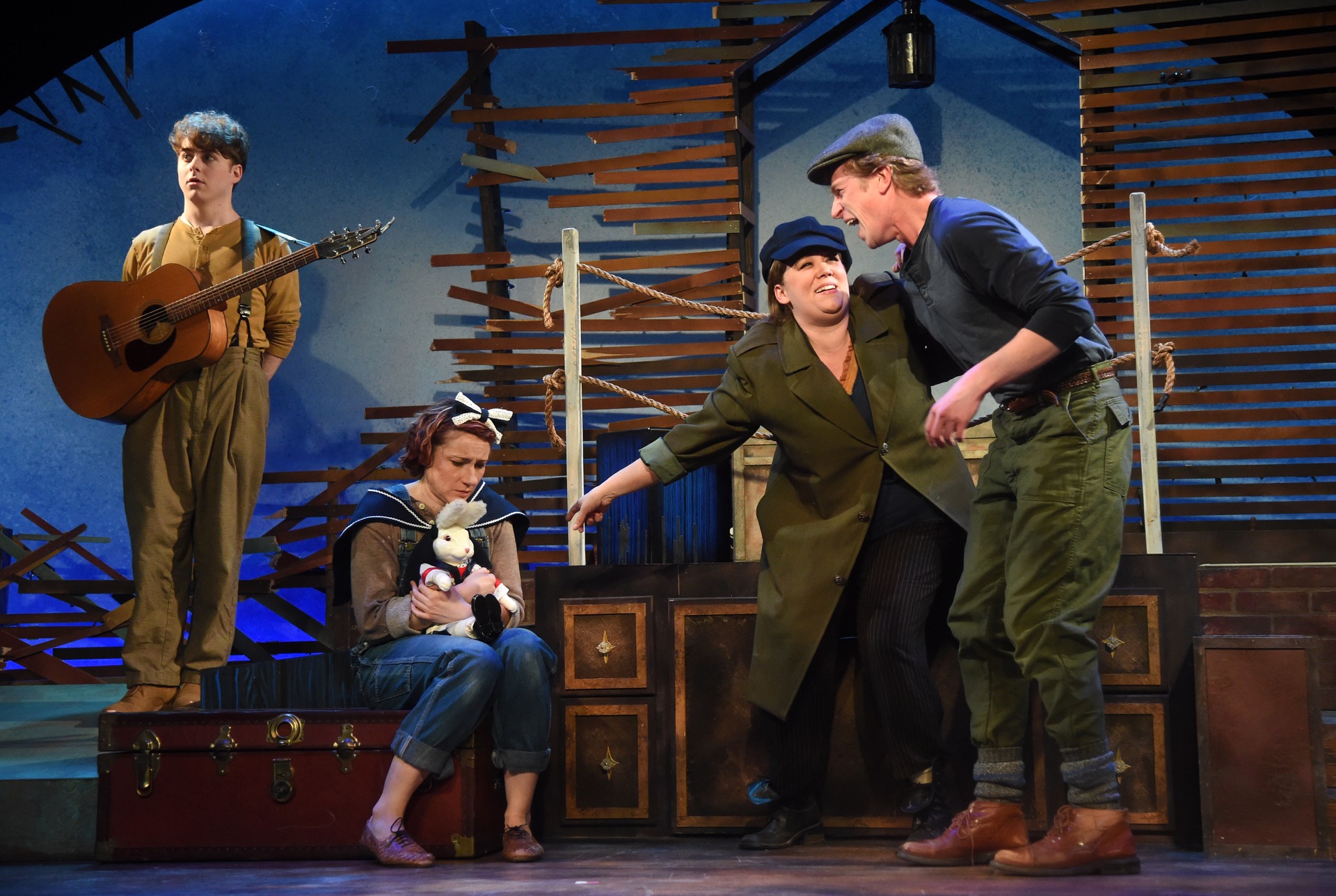 The Miraculous Journey of Edward Tulane

Adapted for the stage By Dwayne Hartford

Based on the book by Kate DiCamillo

Love can truly change everything, even for Edward the porcelain rabbit. Based on the book by Kate DiCamillo, The Miraculous Journey of Edward Tulane follows Edward as he journeys from a lavish life, to some not so lavish lives. Edward reflects and grows by learning from his losses, but sees kindness and compassion as well.

“The thing that stuck with me the most about the show was the lesson about learning from loss or pain. Often in life the best lessons we learn come from experiencing loss, much like Edward learning about love through the loss of all the people he met. But if we let that loss consume us like Edward did at first, we often miss the lesson.” – Aidan Murphy, Lighting Designer 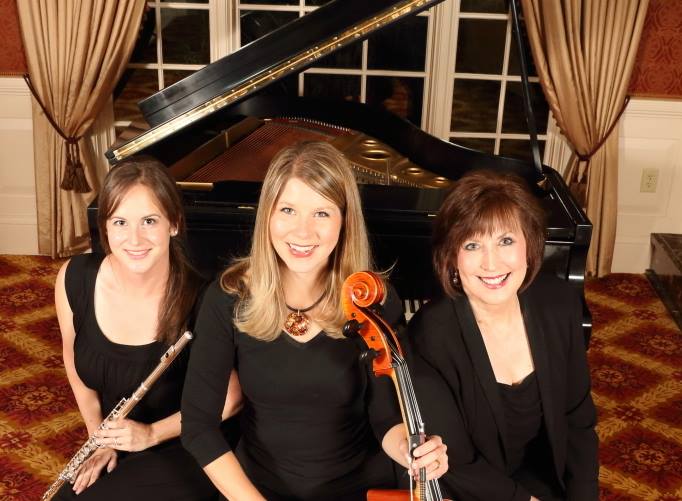