Birth of the Fine Arts Center

The Broadmoor Art Academy was the cultural heart of Colorado, home to not only an art academy but also the local Drama League. 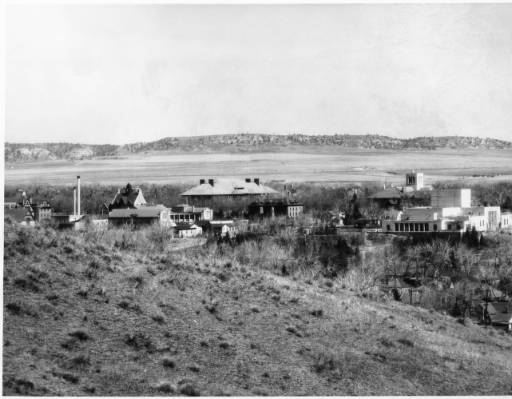 After the Great Depression hit in 1929, the BAA looked at diversifying further, expanding into one of the first multicultural and multidisciplinary arts centers to encompass a fine art museum, art education, and theatre, essentially an entire arts district under one roof. And that’s how the Fine Arts Center came to be.

Julie Penrose donated the land, Alice Bemis Taylor donated her Southwestern art collection and library, and Elizabeth Sage Hare volunteered to serve as the first President of the Board of Trustees.

They enlisted acclaimed architect John Gaw Meem to design a cutting-edge arts center, one that wove elements of Pueblo structures and Native American iconography with Art Deco styles into a grand building that would later earn a spot on the National Register of Historic Places.

It’s all in the Details

The opening week of the FAC in April, 1936, was a period of great excitement in Colorado Springs. In a budding town of 30,000, more than 5,000 flocked to the FAC to enjoy world-class entertainment: a violin recital by Albert Spalding, stage design for Erik Satie’s symphonic drama Socrate by Alexander Calder as well as an exhibition of French paintings by Paul Cezanne, Pierre-Auguste Renoir, Henri Matisse, Pablo Picasso, Georges Braque, Fernand Leger and Vincent Van Gogh.

But what everybody would be buzzing about for years to come were the avant-garde New York based performers. Most shocking: Martha Graham, whose barefoot interpretations of esoteric modern dance left the audience bewildered. Eva Gauthier’s eccentric music and the strange mobiles designed by Alexander Calder and suspended above the performers’ heads were considered most unusual.

When the doors of the new Fine Arts Center opened, the museum within, founded on a commitment to the histories and cultures of our region, presented the community with remarkable access to a collection of works from Native American and Hispanic cultures from the Southwest and Rocky Mountain regions and beyond. A collection that would grow through the years to include works from important Native and Nuevomexicano artists such as Maria and Julian Martinez, Tsayutitsa, Maximilliana Montoya, Margaret Tafoya, Nampeyo, Lucy Parker Telles, Lucy Lewis, Zotom, Jose Guadalupe Posada, Jose Rafael Aragon, Pedro Antonio Fresquis, Jose Benito Ortega, Jose Dolores Lopez, Maria Vergara-Wilson, and many more.

The building boasted a beautiful, modern theatre that added to the venues available to both traveling and community groups, as well as resident companies.

The theatre itself has a dramatic proscenium arch (30-feet wide by 21-feet high) and a 43 by 53-foot stage. The stage includes an orchestra pit which may be covered for additional acting space and (at the time) a 36-line counterweight fly system. The backstage areas include scene shops, storage space, a green room and dressing rooms. The auditorium seats 399 (36 chairs designed by Aalto were added along the back of the house in 1952). The mahogany veneer walls of the auditorium were designed to reflect sound, similar to the interior acoustics of a violin. The stage curtain was framed by a valanced, hunter green Austrian drapery.

Meem commissioned several noted artists to add beauty and ornamentation to the theatre. A superb 950 pound “sunflower” chandelier of aluminum and opaque glass was designed with 48 lamps by Palmer Hargrave of Los Angeles. He also designed the major lighting fixtures throughout the museum.

Robinson continued at the FAC School until his retirement in 1947. Instructors during his final years included Otis Dozier, Arnold Blanch, Peppino Mangravite, George Vander Sluis, Adolf Dehn, Edgar Britton, Rico LeBrun and Lawrence Barrett, the last of whom put the Fine Arts Center school on the map for lithography.

The initial shock of the barefoot Martha Graham spectacle gave way to a summer season of more palatable, professional shows.

Since the 2007 expansion, the FAC has grown into one of the most significant multidisciplinary institutions in the country.